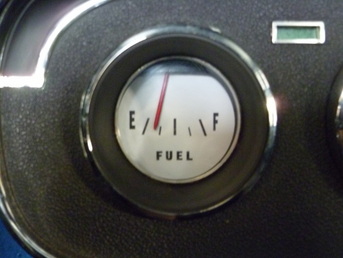 Well I put my car back together.  I rebuild my wire harness.  I had POR'ed the floors and the gas tank.  I had at least 10 gallons of gas in the tank and.... the fuel gauge wouldn't show more than 'E'.

I was stumped.   So I had to learn a little bit more about how that system worked.

First I did some reading.   There was a lot of techy terms etc that I had to sort though but basically it came down to this, the sending unit grounds through the tank and to the body of the car.  The sending unit sends the signal to the gauge.

To do my trouble shooting steps I start with the gauge.  If the gauge and wiring is good, all you need to do is ground the wire end that is on the sending unit (that is in the tank).  If the gauge reads full then the wiring and gauge are in good order.

Next make sure the tank is grounded well.  I took out one screw that is used to install the tank and took a grinder and made sure that there was a good ground.  Then I tested again.  Again still a bad reading from the fuel gauge.

Next it was time to check out the fuel sender it self.  I had to drain the tank.  Lucky for me I have a drain on my tank.  Then using a block of wood and a rubber headed hammer I removed the fuel sending unit.  The it was obvious what my problem was.

Below in the pictures you can see the drain plug.  It can be found on the passenger front side of the fuel tank.  Enjoy!

The other pictures show how rusty my fuel sending unit was.  The float which provides the signal to the gauge to indicate the fuel level amount worked but it was so rusty that the pressure of the float on the gas was not enough to move the level up and down.  Thus it was basically stuck in one place.  Since the tank had been empty for so long it was stuck there. 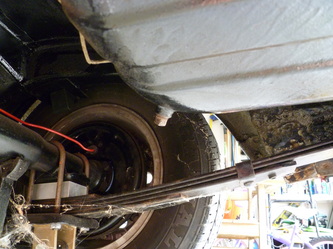 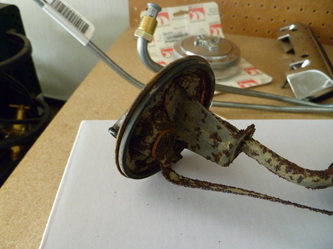 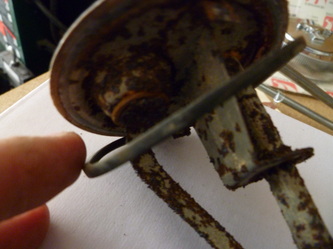 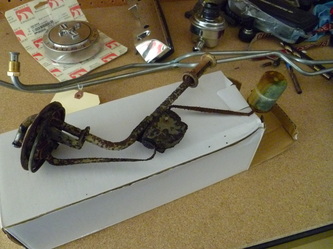 The fix was easy and affordable.  I called my local NPD and told them what I wanted.  A few days later I had a new part and popped it back in.  This took all of maybe 10 minutes.  Take the time to be careful that your seal is set right and doesn't move.  Use a wooden dowel and a rubber hammer so you don't cause any sparks.  That could lead to a bad result.  Then fill with fuel and enjoy.  After this, my fuel gauge works great! 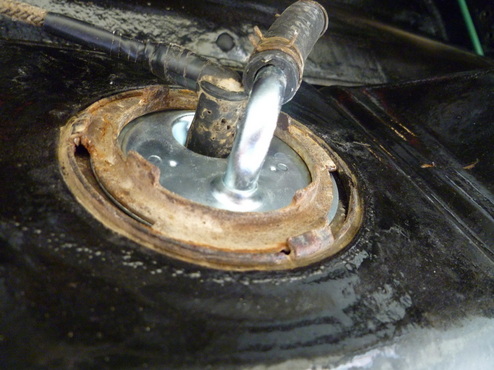