I recently got my car up and running after being in the garage for nearly 3 years.  I took her out for a drive a few times but the car just didn't run very well.  I couldn't figure it out at all.  So I had to kind of start at the beginning and do some research.  I really had no clue as to what was wrong. 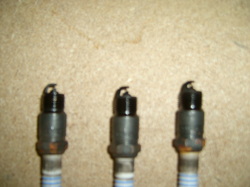 Before I parked my car to take on new projects I did have it running pretty well.  It was strong, fast, and smooth.  I was pretty proud of this.  Since my new projects didn't have much to do with the motor I was really scratching my head.

So to start my trouble shooting I started with making sure I had gas.  I recently fixed my fuel level gauge and installed a new fuel sending unit.  So I pulled the fuel line off the car and cranked the car a couple of times and the gas came (I used a rag to catch the gas).  Then I hooked that back up and double checked the carb.  Looking down inside I could easily see the gas coming in.  Since the car did run I thought 'maybe' it was a problem like a stuck needle but I could get it smoothed out so it seemed that gas was OK.

Next I went with spark.  I started with the timing.  I double checked TDC and reset my timing to 14 BTDC.  Still the same problem.  I discovered that only when the car was under load did it really suck and shake.  So I checked plugs next.  Pulled one at a time and checked them all.  There is less than 5k miles on them and they looked fine.  On a whim I decided to take my timing light and place it on each spark cable to see if it was good.  Interestingly enough, I had a big miss on #8. 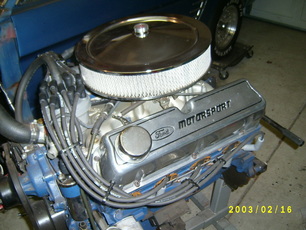 Now with a miss on #8 I wondered what was causing it.  I first suspected my PERTRONIX unit.  I have read many times that these tend to go bad.  I explained my problem to a 'guru' and he agreed that it sounded like it was going out.  So excitedly I bought the new 'Crane XR-i Points-To-Electronic Ignition Conversion Kit' and swapped it out.  I figured for sure I had nailed this!  I didn't.  Exactly the same problem.   So I thought, OK.. My plug is good, my points are good.  That leaves the cap, the button, and the wires.  I now had a big problem.  I just bought the fancy big Ford Racing cap that adapts to the standard distrubutor and the nice thick Ford Racing wires.

During my 3 year project down time, I splurged on this new cap and wires.  I spent some coin on these.  It couldn't be these could it?  They were the only thing I changed on the motor.  So I went to find the old cap and wires.  DARN!  I sold them some time ago.  Off to the local parts store and I purchased and cheap set. 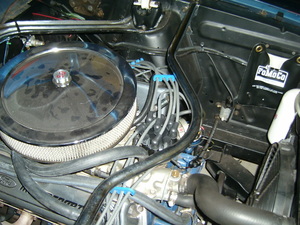 I installed the cheap cap and wires.  Fired up the car and checked each wire.  No miss!  Could I have solved the problem?  I carefully backed the car out of the garage and took a drive.  No problems.  Man was I happy and upset at the same time.  So now I either have a bad high end cap or a bad high end wire.  Either way it cost me more than I had to find out.  In the future I will not make so many changes to the car at one time again.  Its better to be careful.